Between 2006 and 2018, regional geophysical surveys were completed covering the project area targeting gold mineralisation. Firering has obtained access to the survey data and is in the process of completing the interpretation of the data.

From 2019, Atex Mining Resources conducted geological mapping and sampling of the pegmatites to assess their potential to host significant lithium mineralisation. The Group currently has two subsidiaries which hold exploration permits:

In addition, the Company has a wholly owned subsidiary, FH Coltan CI-II, which is not operational but acts as an intermediate holding company for Bri Coltan. Furthermore, the Company has entered into a binding contract to acquire up to an 80% interest in Alliance, a company which has made an application for an exploration permit in respect of lands adjacent to those covered by Atex’s exploration permit.

Firering’s principal asset is a 77% interest in the Atex Lithium-Coltan Project (PR-777), located in the North of Côte d’Ivoire. Firering also has a 51% interest in Alliance Minerals Corporation, which has applied for an exploration licence adjacent to the Atex Project (0094DMICM17).

Small Mining Permits
In addition, the Company owns two small scale mining permits Louria and Zerbokro (AESI 29 and 30), located in the Haut-Sassandra Region of the Sassandra-Marahoué District of Côte d’Ivoire through its effective 75% interest in Bri Coltan, which holds the projects.

Through FH-Coltan I-II, the Company has also secured an option agreement over the Touvré Nickel-Cobalt Project, which is located in western Côte d’Ivoire.

The company plans to advance the exploration of the Atex Project and its lithium potential while also implementing an extensive columbite-tantalite sampling programme.

Lithium and Coltan-Tantalite and Niobium 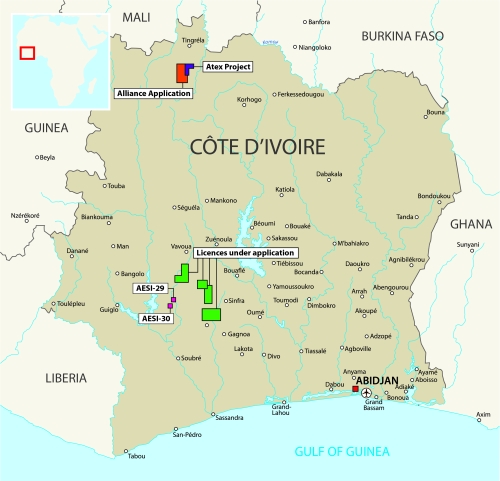 Table of Mineral Assets and Applications